If you’re conscious, you no doubt are aware of the current Pokemon craze that is taking New York, and the rest of the country, by storm. If you’re somehow not aware of Pokemon Go, it is an app that sends players on a scavenger hunt that requires trespassing, office fights, and even walking head-on into stationary poles, all in the name of finding an elusive Pokemon.

The free app gives players access to a new kind of augmented-reality game where they use the GPS functions on their trusty mobile phones to travel around the world while interacting with virtual creatures. To get in on the action, players must use their phone screens to look for Pokemon characters to place in their Pokedex in real-world places including parks, stores, or just about anywhere.

The game was an instant hit, and quickly made it to the top of the App Store. It helped Nintendo’s stock price  increase by 25%. It is so popular, it already has it’s own language that is only understood by players.

An incredible offshoot of the game is that it helps local pizzerias and other businesses increase their profits as the owners are finding ways to have the game bring customers to their establishments.

Since this game requires folks to traverse around town looking for the characters, businesses are seeing a huge increase in foot traffic, which has resulted in increased business. After just one week 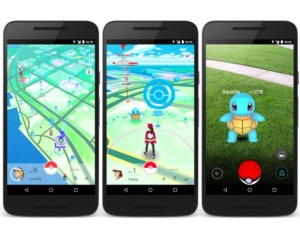 , small and mid-sized businesses such as bars, restaurants, and retail stores all over the country are finding various ways to make money off of this latest craze. Some of the most popular money-making ventures have been special promotions, events, sales, and supplying Lure Modules. Pokemon Go has truly put its stamp on the nation’s economy in a positive way.

The owner of L’inizio Pizza Bar in Long Island City, Queens, Tom Lattanzio, commented on this current phenomenon, “The amount of people has been astonishing. All day long, from afternoon to evening, this past weekend”.

The manager of the same restaurant, Sam Benedetti, added that he paid $10 to lure 12 of the Pokemon characters into the store and it drew so many players that the store’s business increased by a whopping 75%. You cannot argue with those kinds of numbers.

The trick for businesses to take advantage of this latest gem of pop culture is through the Lure Modules. Players need Lures in order to play the game. Businesses can purchase Lures for a nominal fee of .99 for 100. In return, they can expect to get about a half an hour’s worth of customer traffic. So, it is a small investment that can reap a large return.

No business is exempt from becoming a Pokemon Go destination. Smart business owners are doing everything they can to promote their business in this way. It is truly a no-lose situation for a business that is trying to increase foot traffic and ultimately its bottom line.